The Eerie, Dreamy Island of Skomer

Off the west coast of Wales is an island called Skomer, one of the most strange and beautiful places I have ever seen. In the summer it is inhabited by hundreds of thousands of sea birds, many rabbits, and very few humans. A limited number of day visitors come and go by ferry; no more than 14 guests are allowed to stay overnight.

It is a place of crazy, senseless beauty but for me the most luxurious part of the visit is the silence, except it isn’t really silence: the cries of a million birds can be pretty raucous. It’s just that there are almost no human noises. Walk away from the hostel after the last ferry leaves taking the day visitors and you are quite alone. No cars, no telephones, internet, screens, television, restaurants, or gift shops. Time there is about cultivating and going into this silence that isn’t really silence. 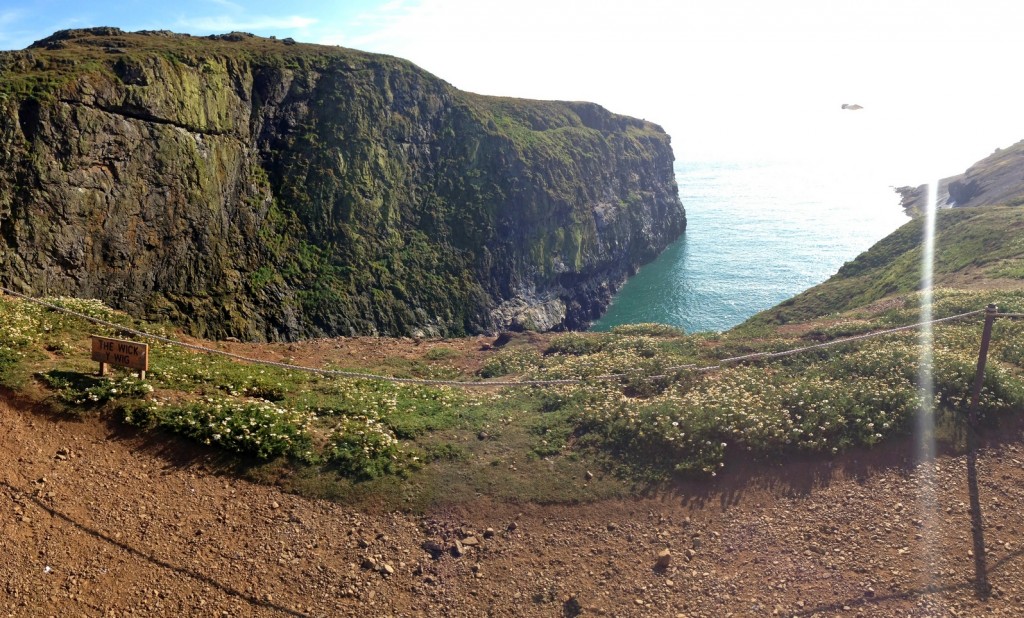 You sit down on the grass over a cliff to watch a fulmar, that graceful, snowy cousin of the albatross, soar in circles as it catches a thermal. An hour goes by, and you rise feeling still and grounded and fed by something you didn’t know you were hungry for and that is the sort of thing that brings regulars back to Skomer over and over. And then there are the Manx shearwaters. There are at least a million on the island and of those, hundreds of thousands are breeding pairs. They travel far over the water to feed during the day in an effort to avoid the island’s predators, the larger blackwing gull. They return en masse to their burrows in the middle of the night, and you can go out and stand in the blackest darkness while they come in all around you, with eerie cries, and for all the world its as if you are standing in the midst of infinite wraiths. This sort of thing gets under your skin and then you need to feel it again, if for no other reason then to remind yourself that you didn’t make it up. You need a fix even if it is once a year. 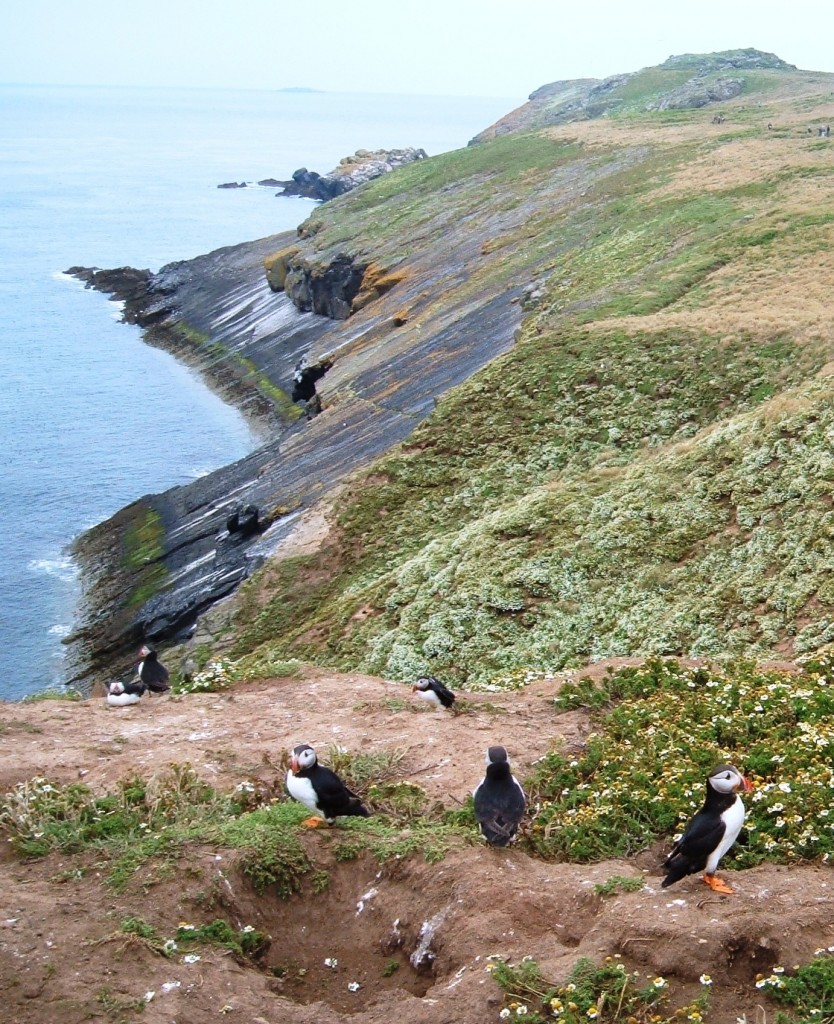 Puffins near the Wick

Lots of us come, at least the first time, to see puffins, tens of thousands of pairs. They nest in underground burrows and regularly fly out to see to collect bills full of sandeels. While it is hardly the high-minded or spiritual, they are just so darn cute! They do not look real. They move like tiny Laurel and Hardy dolls. And they are so unafraid that they will walk over your shoelaces if you are standing in the road when they want to cross. (Did I mention CUTE?) 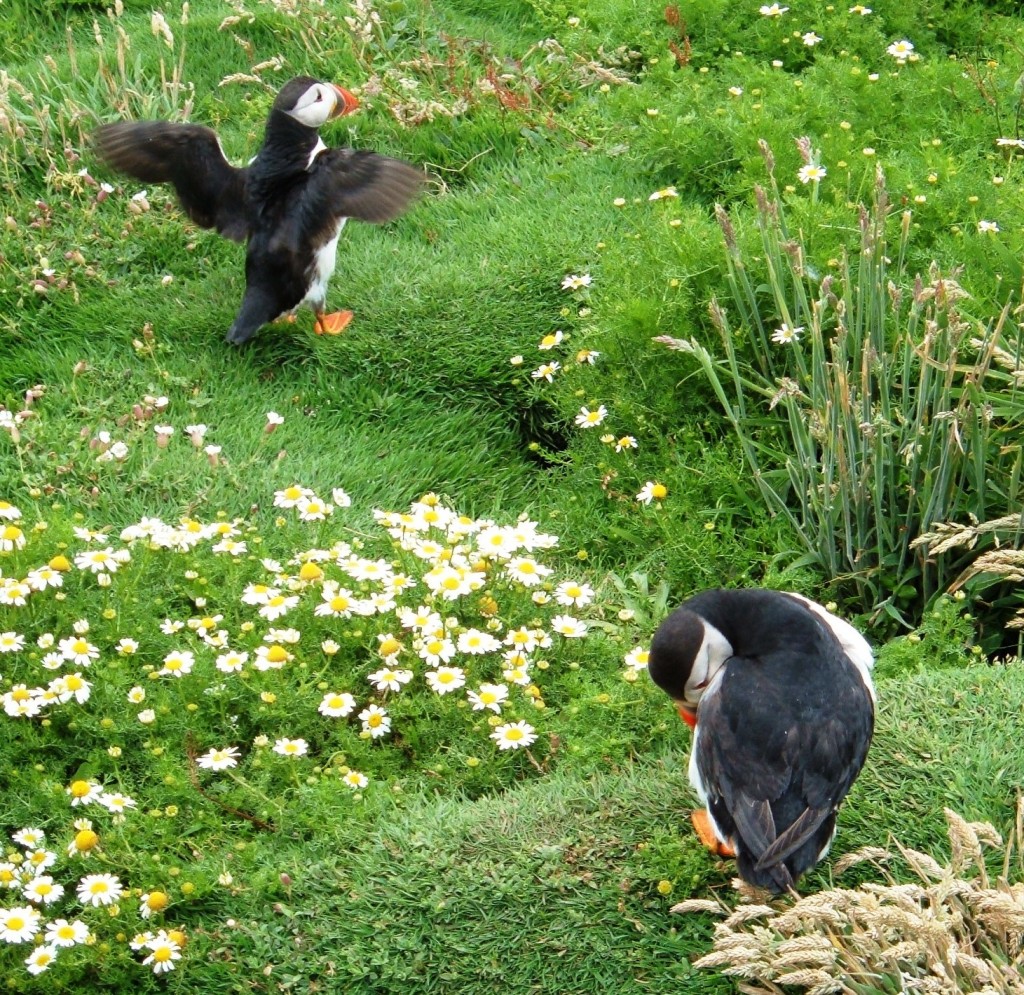 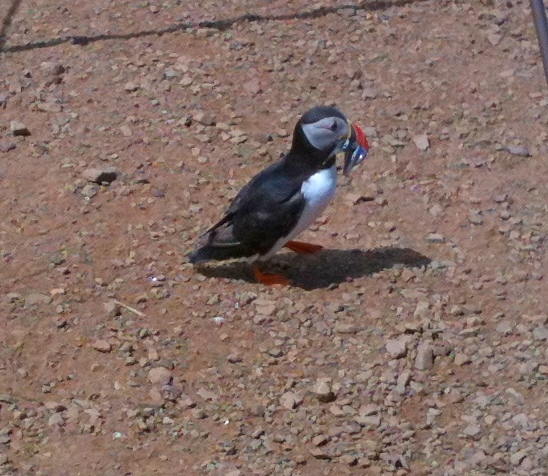 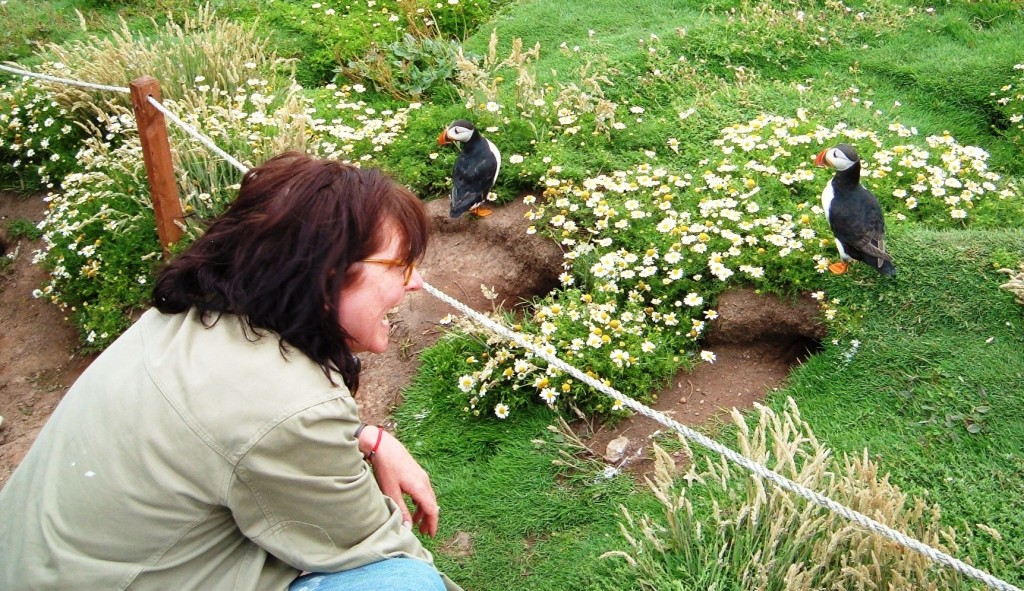 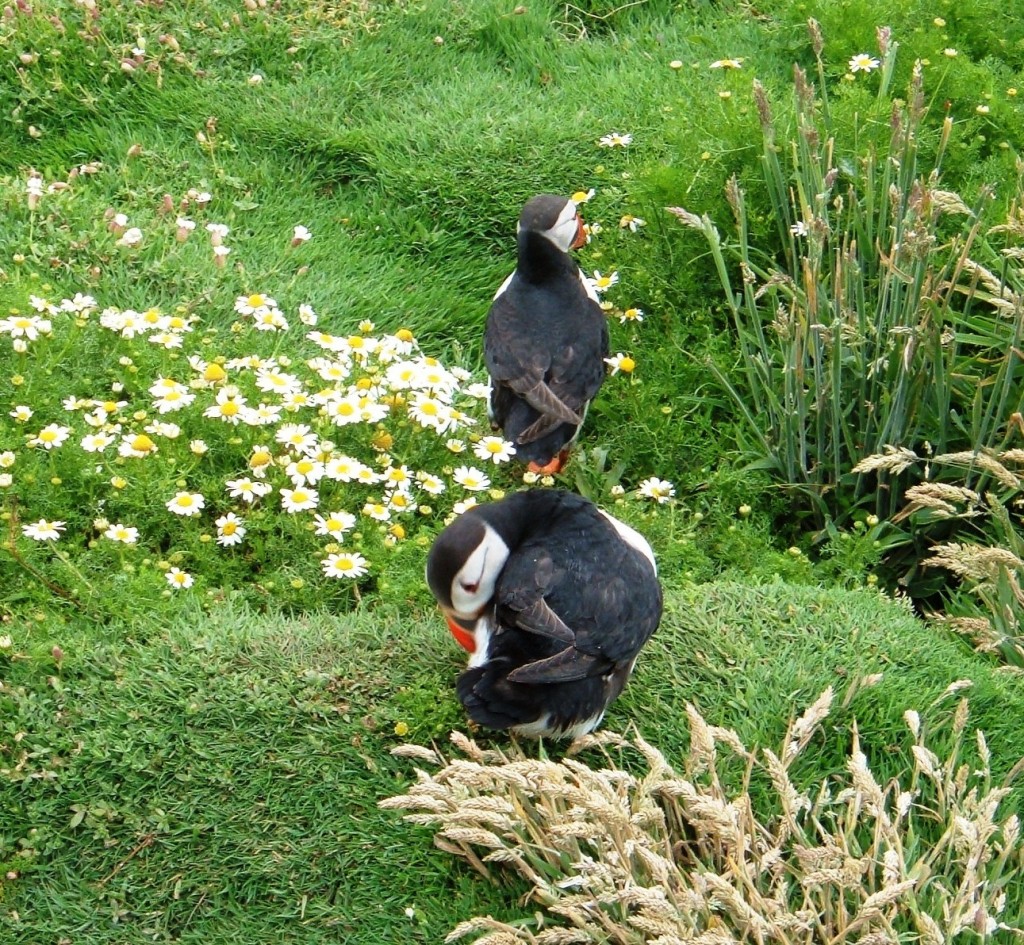 In the 13th century, Normans brought rabbits to Skomer for fur and food. Now they are a notable population, active in the early morning and at dusk. If you wait until early evening, one minute there are no rabbits to be seen and the next they are everywhere appearing from seemingly thin air like a storybook come to life. RABBITS wherever you look.

Off the coast, especially near Garland Rock, it is possible to see several seals, swimming and sunning themselves. Recently I counted around twelve. They blend into the scenery, but with patience and a pair of binoculars you can make them out. It is a pleasure to watch them haul themselves onto the rocks below and frolic in the surf. Apparently they have their pups in September and this is also quite a site, but I have yet to see it my myself.

Skomer has a long history. It is believed that there were hunter-gatherers in this part of Wales as far back as 37,000 BCE, when it would have still been part of the mainland. There is clear evidence of a population of up to 200 dating from the Iron Age, 5,000 to 2,000 BCE. These farmers left behind cairns as well as the remains of a round house and a long, stone fence.

Night visitors stay in a refurbished 1840s farmhouse. It is a sparse but not uncomfortable hostel. You bring in your own sheets, towels, and food, and take everything, including your garbage, off again when you leave. There is a strong, agreeable feel of camping about it, and although there is electricity, it is limited – there . are only two electrical outlets in the entire building, and you are strongly discouraged from using them unless it is necessary. (In my experience there are two kinds of people: those who have no problem with this at all, and those who all but hunker down around the outlets as if they are a lifeline and jealously watch anyone else who uses the plugs.)

We have usually had comfortable nights but once, even though it was June, we were freezing and damp because we did not take that whole island-off-the-coast-of-Wales thing seriously enough. Since then we have always brought thick, warm socks, sweaters, waterproof jackets, LAYERS – and we have had nothing but gorgeous weather! 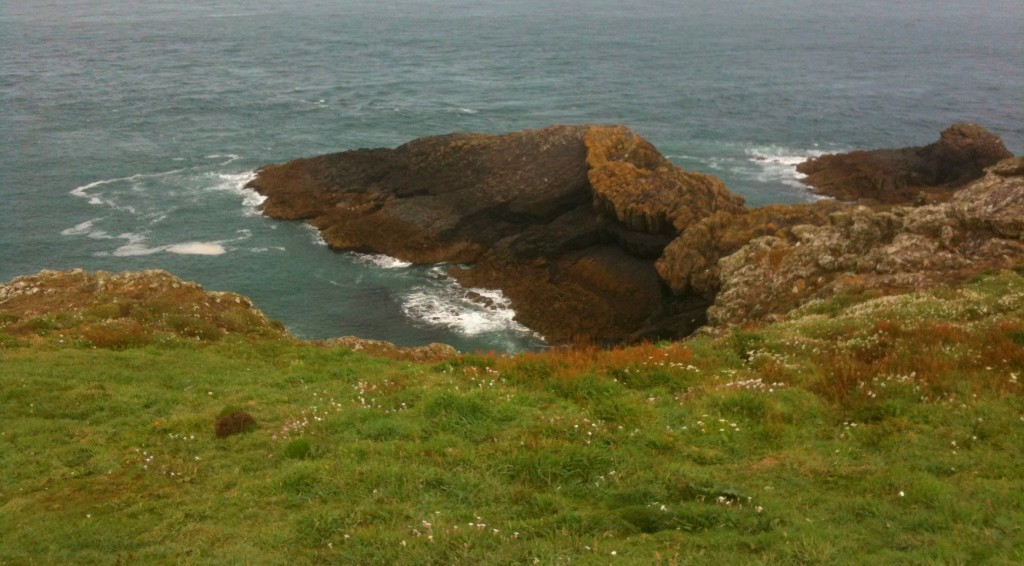 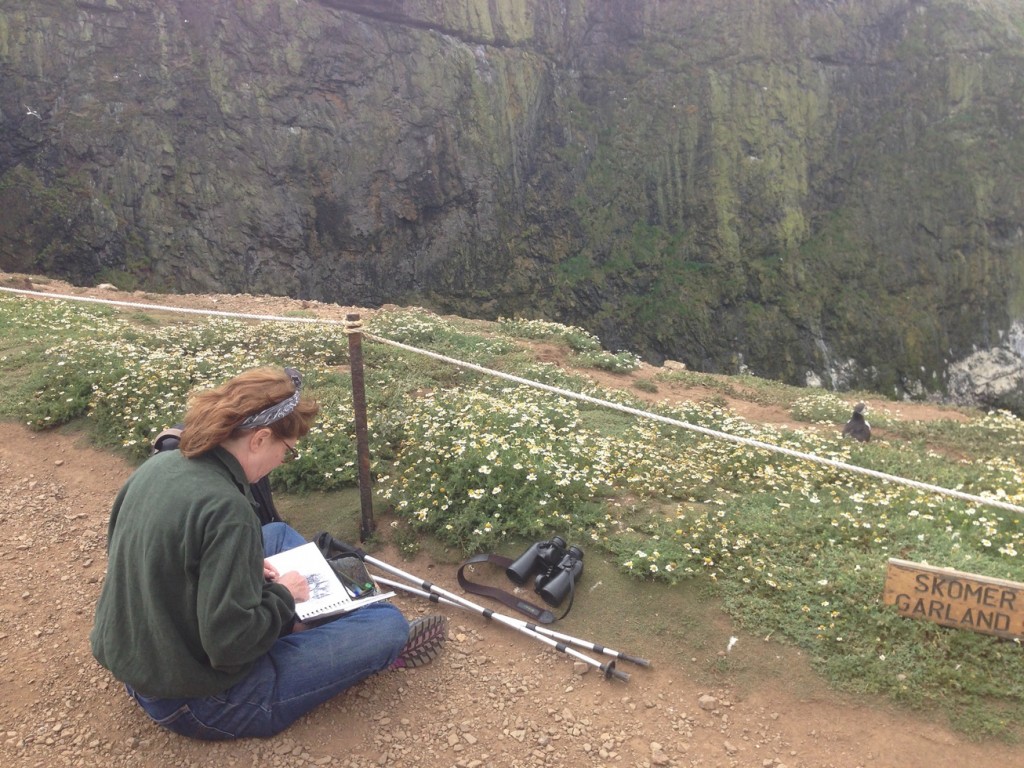 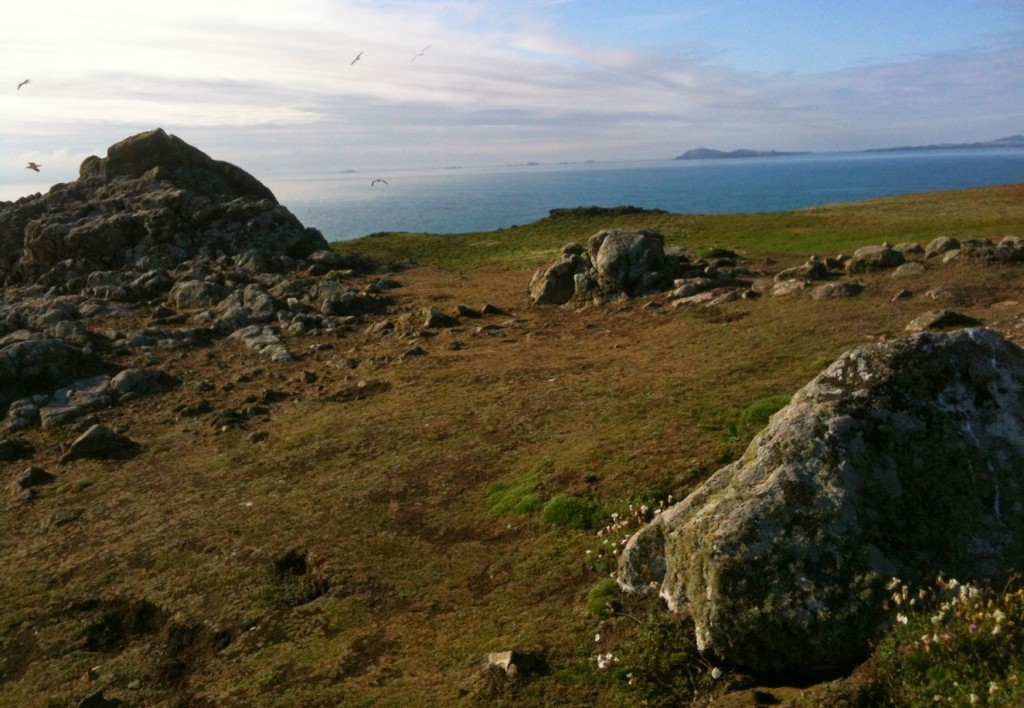 View of the coast 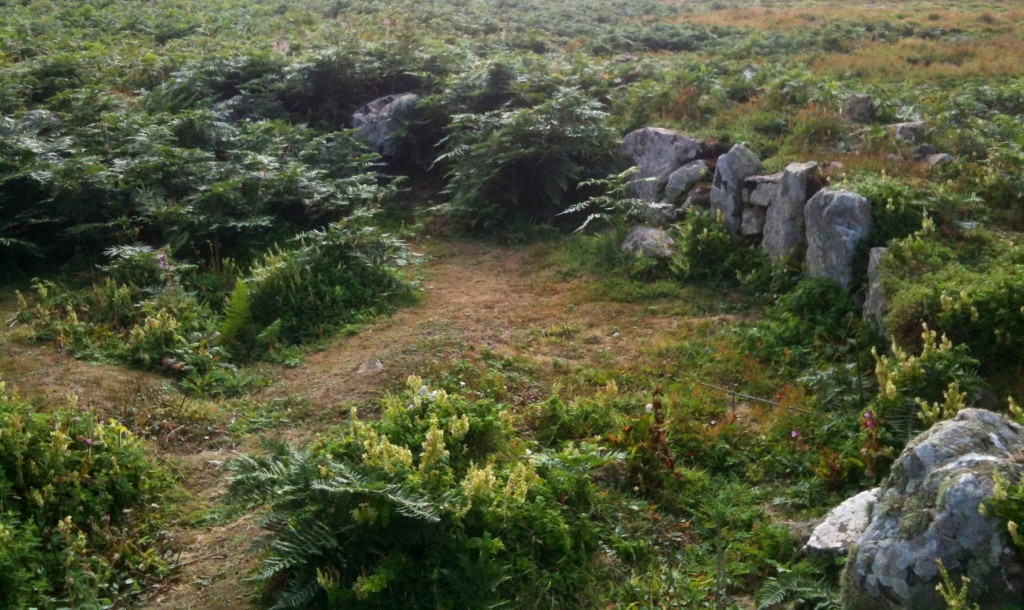 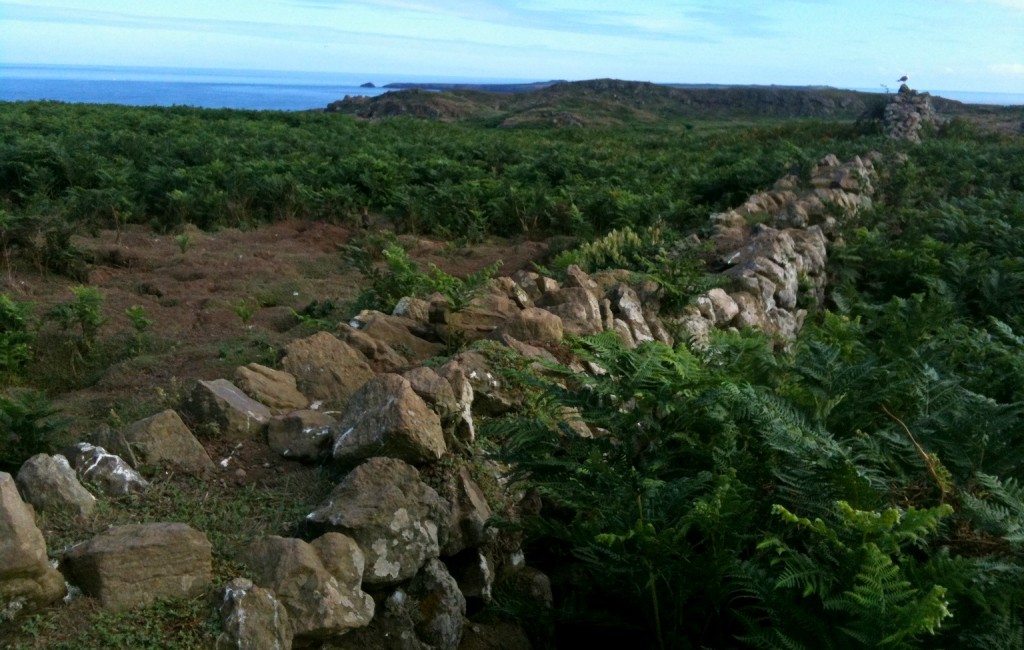 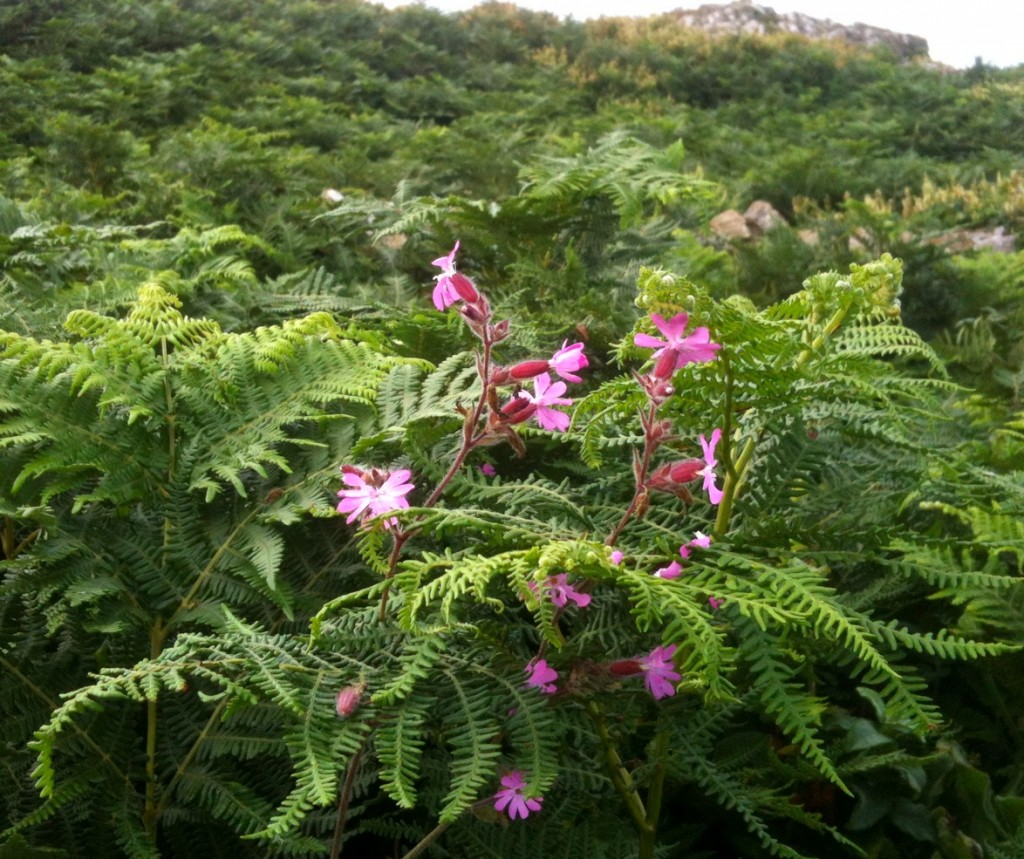 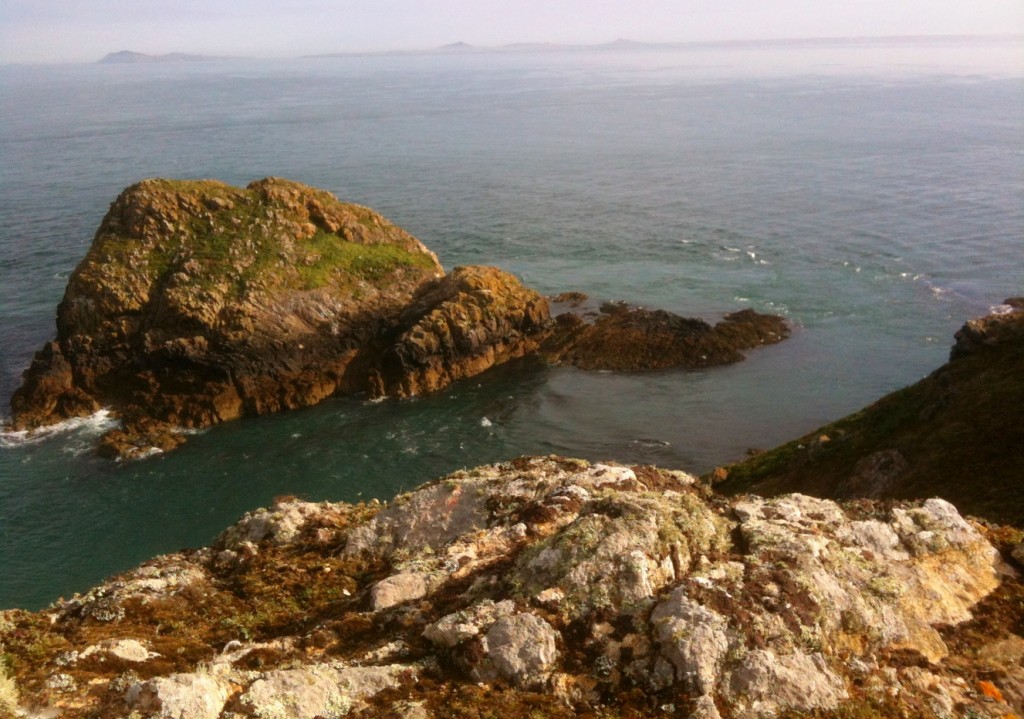 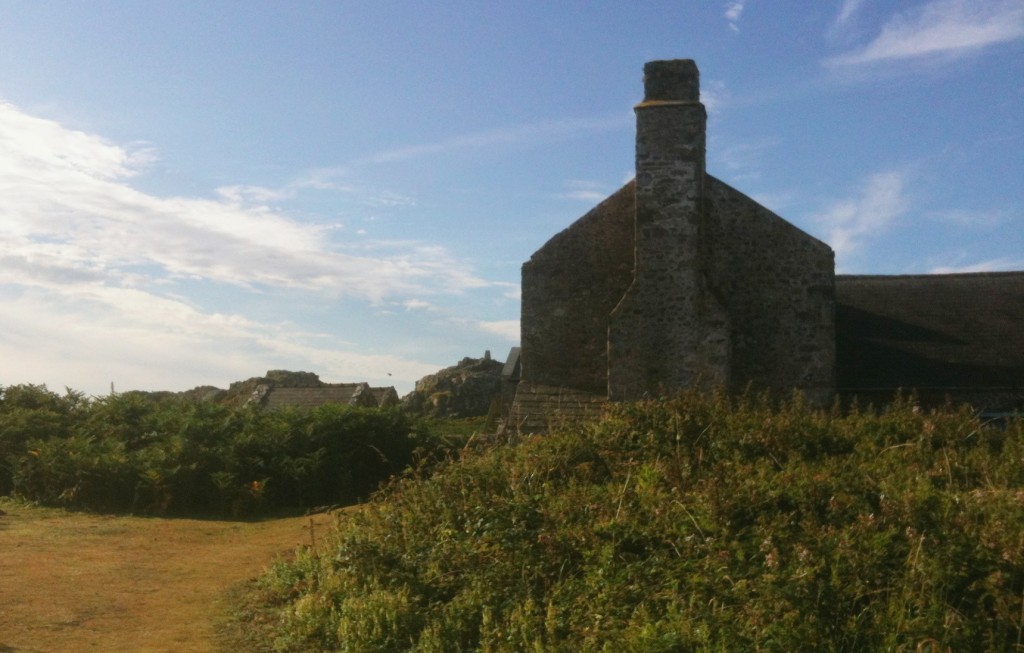 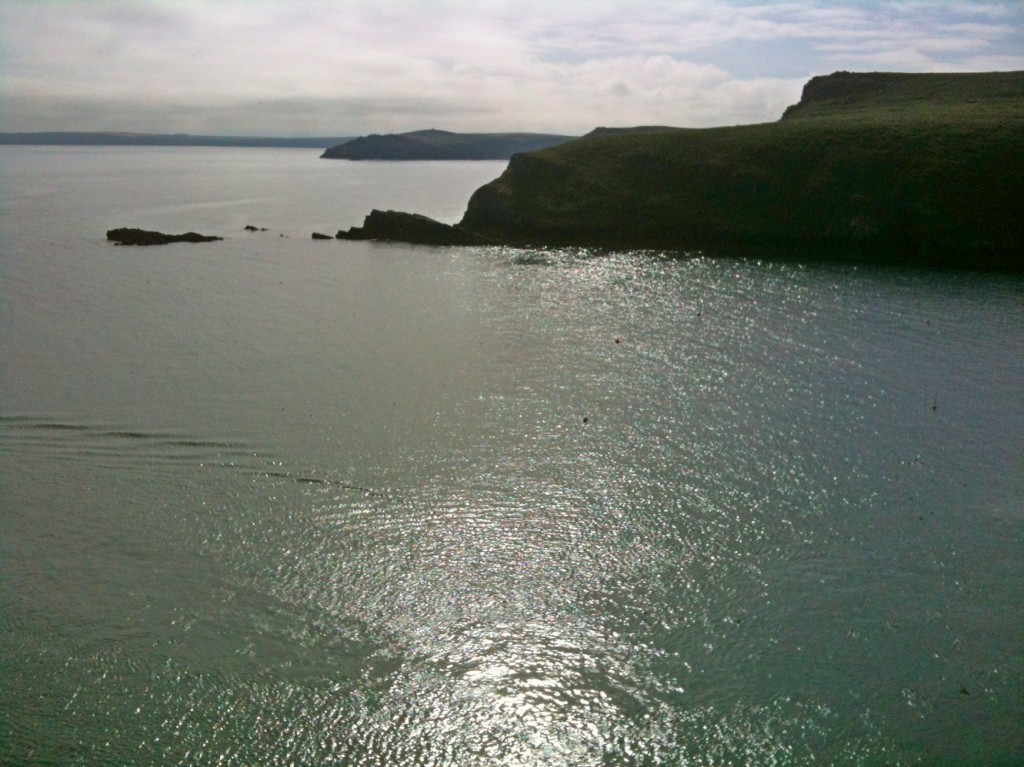 View at the closing of the day 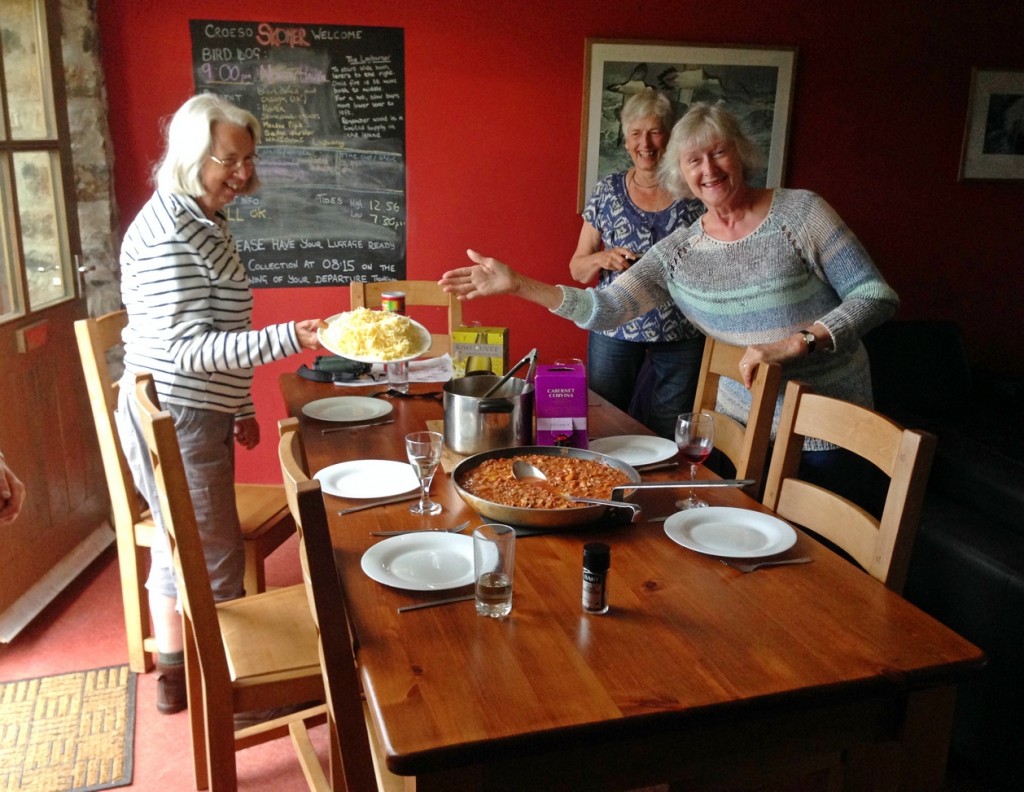 New friends at the hostel, a book group from Hampshire 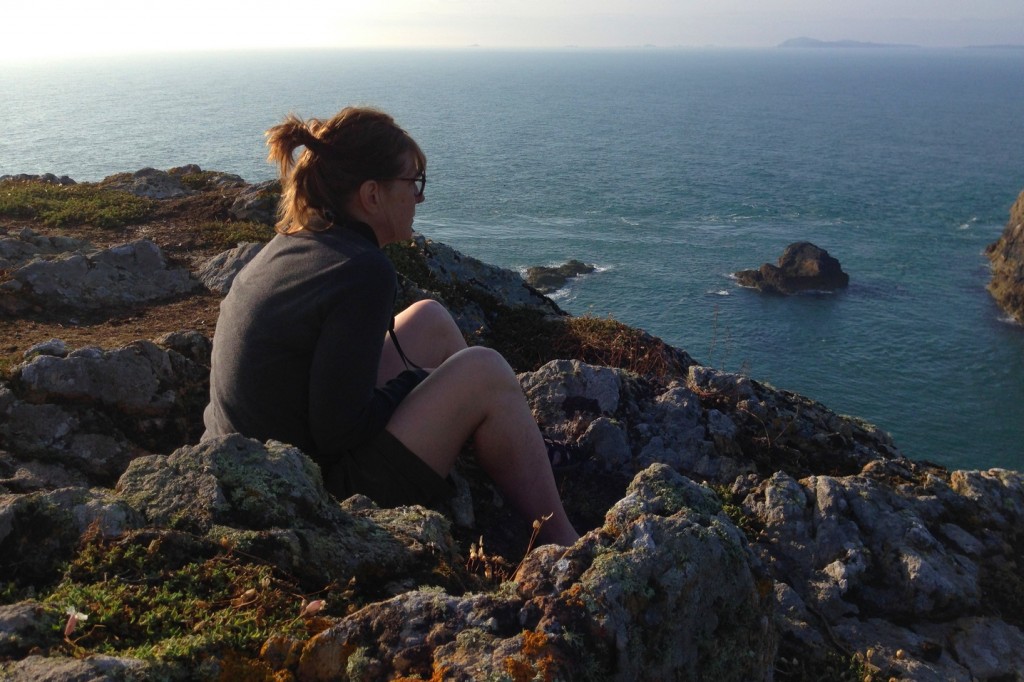 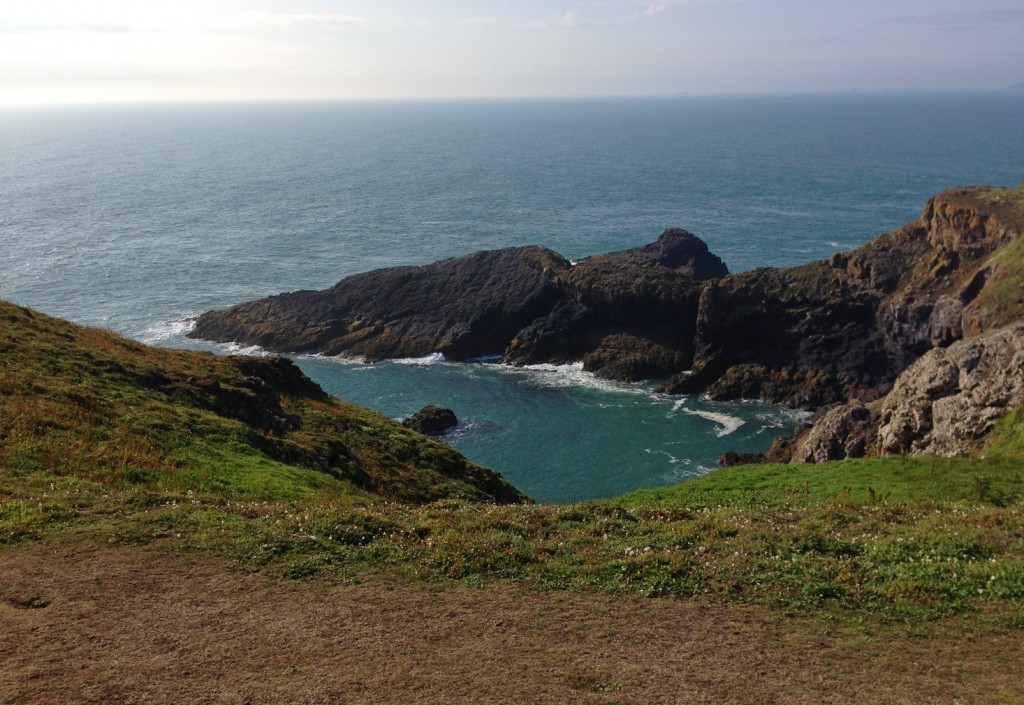 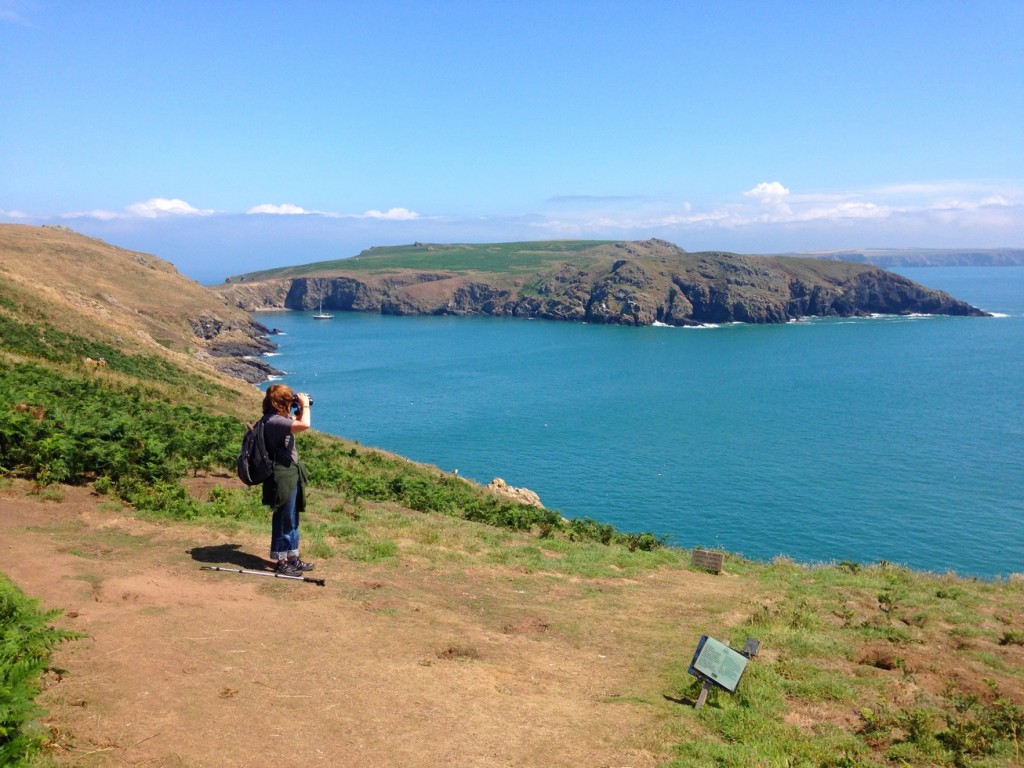 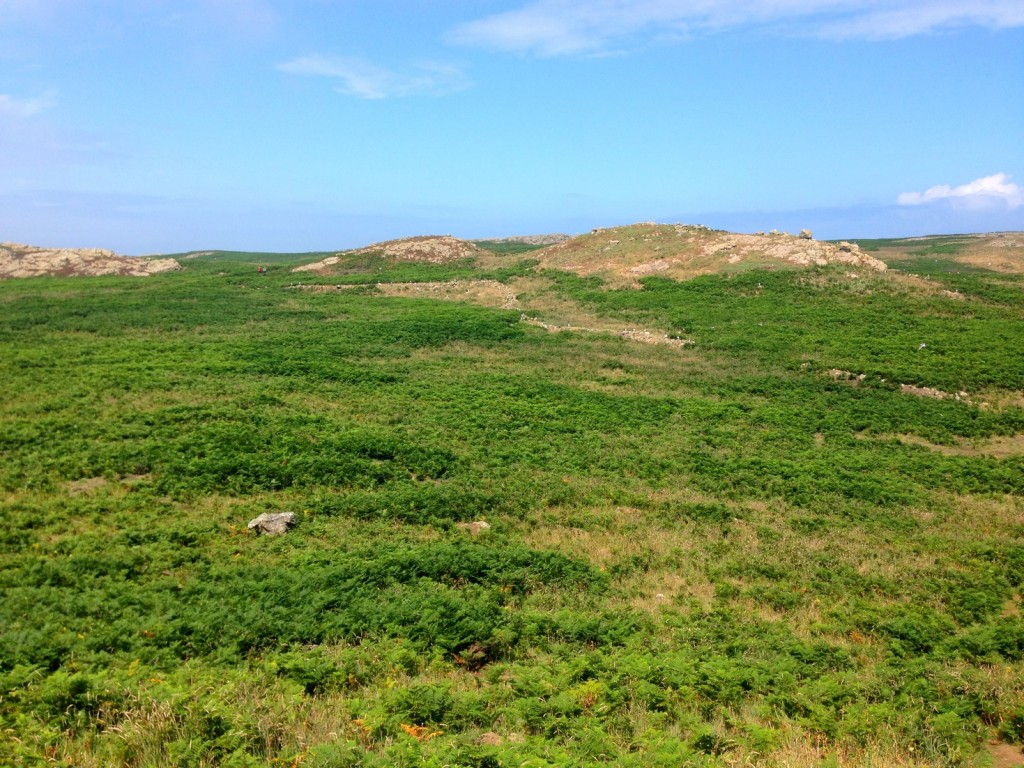 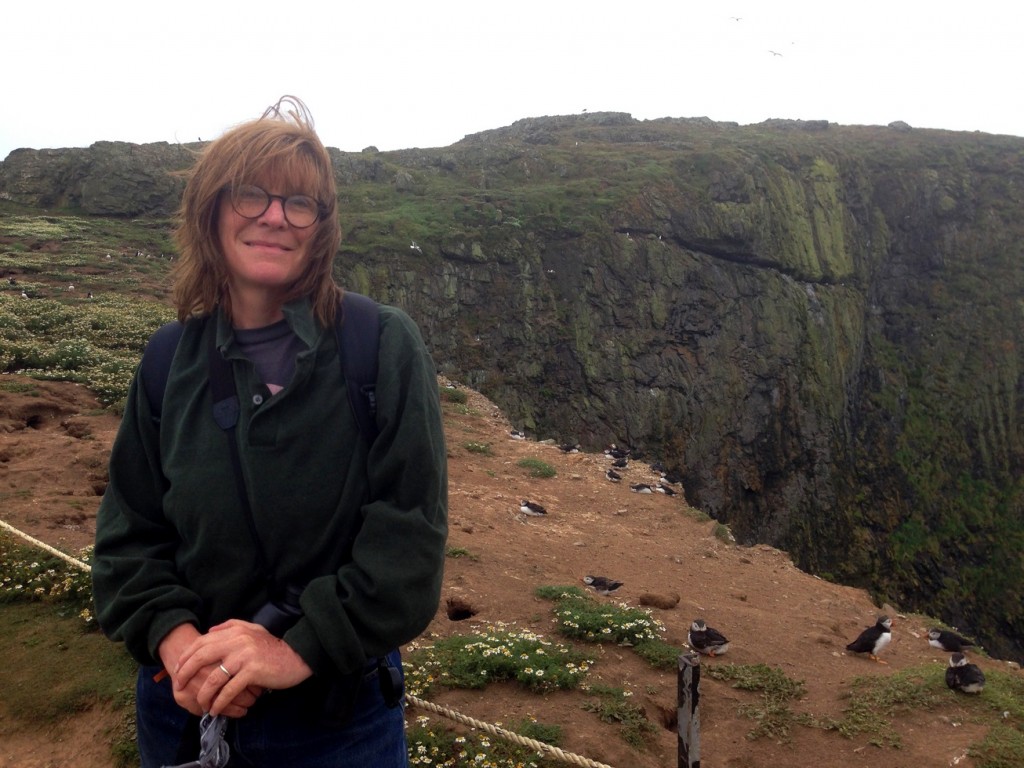 The Wick, home of razorbills, guillemots, fulmar, and kittywakes 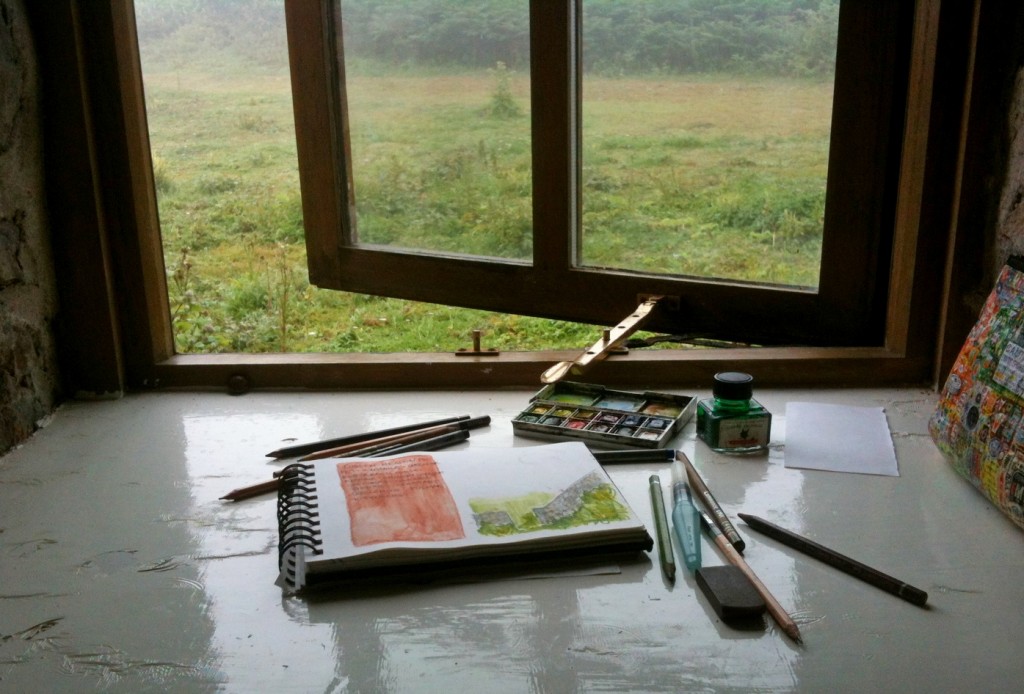 Illustrated journal, sketching from the window of the room 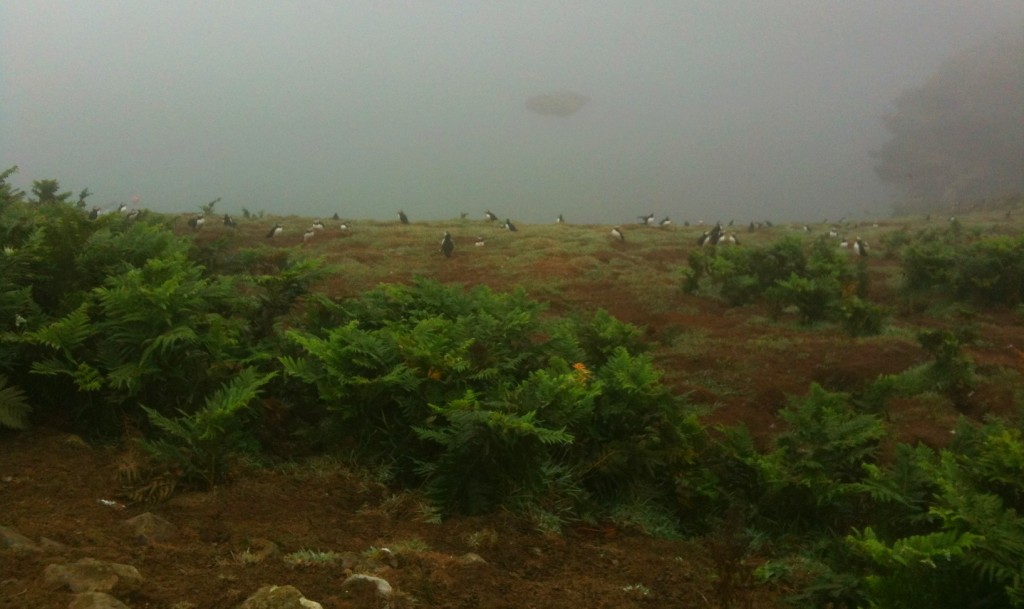 Leaving Skomer in the mist with puffins

If you are interested in staying overnight on Skomer, you have to be quick. Bookings open in the fall around October and go quickly. Also, be prepared, it is not exactly cheap. This year it was £120 (almost $200) per night per couple. All I can say is I recommend you cut corners somewhere else and spend the money for this life changing excursion. If you want to sample it, you can always make the day trip to get an idea of the beauty and sense of peace.

To read more, go to: http://www.welshwildlife.org/skomer-skokholm/visiting-and-staying-on-skomer-and-skokholm/