“We had three or four whiskies in the afternoon and a lot of gin pahits later on, so that when dinner came along we were by way of being rather hilarious and I’d come to the conclusion that he was a damned good fellow. Of course we had a lot of whisky at dinner and I happened to have a bottle of Benedictine, so we had some liqueurs afterwards. I can’t help thinking we both got very tight.”

The End of the Flight

Every couple of years or so this craving to read Somerset Maugham hits me; usually when I have just finished a big project and am about to begin another and can’t quite face it. Instead, I open any pick any collection of short stories (there are several strewed around at all times), open it at random, and dive in. The next four or ten days (depending on how much I can get away with) are spent on tea plantations, or far-flung colonial outposts, or steamers plowing their way across the Pacific and other points east where the rain never stops and dressing for dinner disguises misbehavior and despair, and standards are upheld by any means necessary, even if those means include murder.

Somewhere around the middle of 34th story in a row I pulled myself together, put away my white linen suit and Panama hat, and told the boy to bring in the glasses from the verandah. Then I thought – wait just a minute. What was actually in those glasses anyway?

No matter how many times I have read these tales, when I come to a drink I don’t know – and there are many – I just mentally squint and keep going. It’s a drink, it has gin, whatever, keep reading. (I do the same over arcane church matters when I reread the Barchester Chronicles every other year.)

I looked them up. (Cocktails, not church matters; still darned if I know what a rector is.) Now that I have a better picture in my brain of what all of those drinks look like, so will you.

“Like all good Dutchmen in the Far East he began his lunch with a small glass of Hollands gin. It has a musty acrid flavour, and the taste for it must be acquired, but Mr Gruyter preferred it to any cocktail. When he drank it he felt besides that he was upholding the traditions of his race.”

The Vessel of Wrath

Also known as Dutch gin, genever, or sometimes by its common brand name Bols, Hollands gin is the national drink of the Netherlands. It is sweet rather than dry, as opposed to an English gin, and it is rather malty. Traditionally it was served at room temperature in a tulip glass or in an ice-cold shot glass filled to the rim so that the first sip must be taken by bending over the drink on the counter. I decided to try it for myself, at a bar in Schiphol airport in Amsterdam during a recent layover. To me it tasted like a less fierce grappa, but definitely not as bad as it sounds. 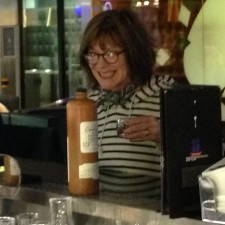 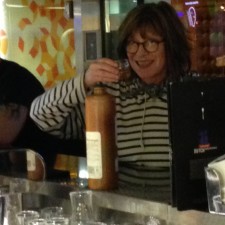 “They went into the lounge and the Irishman ordered a dry Martini for her and a gin pahit for himself. He had lived too long in the East to drink anything else.”

“They stood me drinks and I, a temporary member of the club, returned the compliment. The drinks were very small, quarter whiskies, and in the two hours we played each of us able to show his open-handedness without an excessive consumption of alcohol. When the advancing hour suggested that the next rubber must be the last we changed from whisky to gin pahits.”

“In a row of shelves were untidily stacked a good many books, their bindings stained with damp and the ravages of white ants. Featherstone showed me my room and left me with the words:

‘Shall you be ready for a gin pahit in ten minutes?’

Arguably the cocktail that best conjures up Maugham’s world, a Gin Pahit is simply gin and bitters; the name is the Malaysian for “bitter gin.” It is sometimes called a Pink Gin, a drink you might recognize if you watch enough British propaganda movies from WWII. It had long been a staple in the British navy where between the quinine in the gin and the herbal nature of the bitters, it was considered medicinal.

Ingredients of a Gin Pahit

“…the first-class passengers sauntered aimlessly about the promenade deck. Most of the men made for the smoking-room and sought to cheer themselves with whiskies and sodas and gin slings.”

The Gin Sling apparently goes back to the late 18th century. Gin, lemon juice, and cherry brandy are shaken together, topped with soda water, and served with ice. It is also common to substitute pineapple juice for the lemon. Somewhere around Maugham’s heyday it became known as the Singapore Sling.

“What do you say to a little drink?”

He clapped his hands for a boy and ordered two gin fizzes. As the boy brought them a man passed along the street outside and seeing me waved his hand.”

A Friend in Need

Similar to the Gin Sling, it is gin, lemon juice, soda water, and sugar, shaken over ice. At the height of its popularity in pre-Prohibition days some bars supposedly had teams of bartenders who did nothing but shake them and keep them coming.

“She let me lead her into the next room and we sat down on the sofa. I told the amah to fetch the whisky and siphon and I mixed her a good strong stengah and made her drink a little.”

The stengah is another one of those drinks that turns up regularly in Maugham’s Malay archipelago. It sounds so exotic, so mysterious, that it is a disappointment to discover that it is really nothing more than a fancy name for a whisky and soda on ice.

Elliott explained that it was the Polish form of vodka but in every way vastly superior.

“We used to drink it at the Radziwills’ when I stayed with them for the shooting. You should have seen those Polish princes putting it away; I’m not exaggerating when I tell you that they’d drink it by the tumbler without turning a hair. It’s an experience no one can afford to miss…

…The waiter poured out a glass of pale green liquid and Isabel sniffed it.

“Hasn’t it?” cried Elliott. “That’s the herbs they put in it; it’s they that give it its delicate taste….it smells of freshly mown hay and spring flowers, of thyme and lavender, and it’s so soft on the palate and so comfortable, it’s like listening to music by moonlight.”

Zubrovka is a vodka infused with herbs and bison grass native to Poland. It is served very cold, often mixed with apple juice. In The Razor’s Edge, it is the deus ex machina by which conniving good-girl Isabel deliberately leads the demon-driven (and recovering alcoholic) Sophie to a relapse that results directly in her death.