An Expat in Wales: Life in Swansea

Growing up on a farm on a dirt road in Mississippi I dreamed of travel, of one day living someplace far away and glamourous. Like Swansea. Okay, maybe not glamourous in the sexy sense of the word but in the sense that it is unfamiliar and offers endless opportunities for discovery. This is in itself a kind of enchantment. 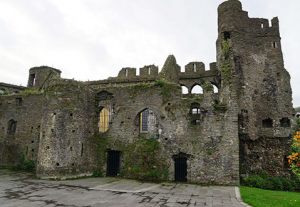 For me, a trip to Swansea Market is a strange delight. Fishmongers! Of course you can get fresh fish in America but until I moved here I had never seen  honest-to-gosh stalls devoted to nothing but fresh, shiny seafood. Pig’s trotters! You know what you just do not see in America? Severed pig’s feet piled in a cardboard box and skinned porcine carcasses on a pallet. Gruesome, yes, but fascinating and a deeply important reminder that our food comes from a living source, not some sterile styrofoam factory. Oops, my proofreader (otherwise known as my husband) says that we say “polystyrene” here.

Getting back to Swansea market. I love that when you ask a vendor if her butter is local, she looks a little said and says, that no, it comes from a farm at least thirty miles away. In America, I would feel that any food from within a tri-state area is reasonably local. I love that you can buy your Gower potatoes and Prembrokeshire cauliflower from friendly vendors who enjoy making conversation over the transaction as much as I do. It is the anti-self-checkout. 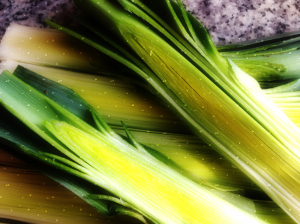 One thing the veggie stall ladies and I kicked around recently was the subject of leeks. The first time I visited Swansea ten years ago, these same abundant displays of leeks made me crave them, but I was afraid to scare off my then husband-to-be by my extravagance. In America, in the south at least, leeks are rather unusual and if you find them at all they will be rather expensive, so much so that when we lived in Tennessee and made homemade cawl, the leeks cost more than the lamb! The fact that in Wales leeks are the poor woman’s asparagus is just one more reason to love this place.