The oldest known work of figurative art has been found on the wall of a cave in Indonesia. It is 44,000 years old and spans over 16 feet, depicting a hunting party in pursuit of wild cows and pigs. The animals are portrayed as huge while the people are tiny, although they do have some fantastic, supernatural elements such as lizard-like tails and a bird’s head on a man’s body. (If you like learning new words, this is called “therianthropy”.)

I don’t know about you but the evidence of the need to create, reaching out to us from 400-centuries inspires deep, almost wordless awe in my tiny, human brain. Also, it is a lot like a journal page, if a journal page was 16-feet big and on the wall of a cave. Just saying, people you might want to think about making an illustrated record of your days in your sketchbook. 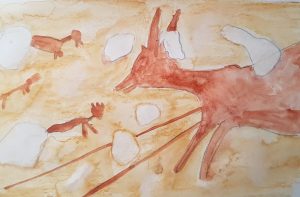 This is not the painting. I don’t have a legal right to post it so I drew my version. To see a photograph of the real thing, go here to National Geographic.

Here is Your Pep Talk: Joy As an Act of Defiance